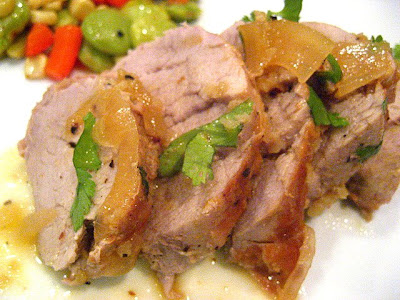 I just realized how the expression "Sufferin' Succotash!" from the cartoon characters Daffy Duck and Sylvester came about.

Growing up in a house of frozen vegetables and tater tots (not the good Ore-Ida Crispers!), punishment and suffering was being served lima beans. That was a fate worse than brussels sprouts.

That is how I learned to use my gag reflex, eating those pale green, dry, yet mushy legumes with my baked potato in foil, no sour cream allowed. My mom was mean. Look out.

I have made peace with brussels sprouts and actually LOVE them, roasted, or sauteed with bacon........so I think it was about time to make friends with lima beans.
Hell, I've never met a bean that I didn't like. 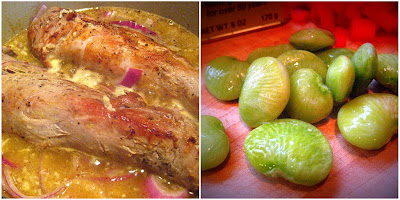 The June issue of Bon Appetit had a succotash recipe and I figured I would give it a try. I skipped the green beans and bought real lima beans and soaked them overnight.

Frozen corn, red pepper, a bit of butter and Old Bay Seasoning made this a delicious side dish. 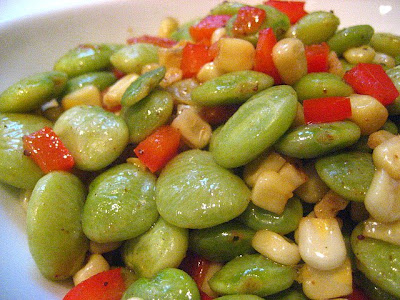 Heat olive oil on medium-high heat in a heavy sauce pan and add your vegetables, saute a few minutes until crisp. Add in butter, Old Bay and season with salt. 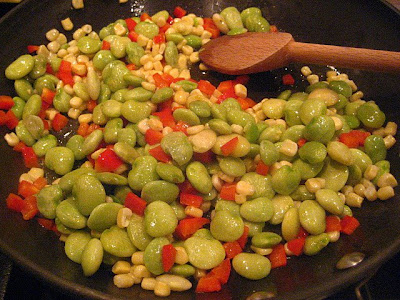 Served along with this delicious recipe for Orange & Garlic Roast Pork Loin from bitchincamero, there was no suffering eating this meal! 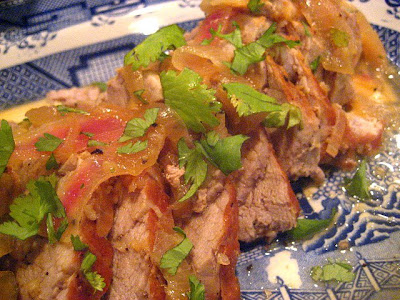 Ciao Chow Linda said…
You'd help anyone overcome a lima bean aversion with that yummy looking dish you prepared. The lima beans look so succulent and flavorful, as does the pork roast.
June 29, 2009 at 7:46 AM

Foodiewife said…
I can so relate on lima bean aversion. I have a recipe for succotash that is to DIE for, but it's loaded with heavy cream. This version looks far healthier, and I think I could easily eat this.
I love Old Bay Seasoning-- it's my not-so-secret ingredient in my egg salad sandwiches.
June 29, 2009 at 10:51 AM

T.W. Barritt at Culinary Types said…
I have avoided lima beans consistently and didn't even know you could by them dried. These look much more appetizing and appealing, like fava beans.
June 29, 2009 at 3:33 PM

bitchincamero said…
Thanks for including my recipe :)

I love Lima Beans! Especially when sauteed with chorizo and tomatoes and tossed with spaghetti. MMMMM!
June 29, 2009 at 3:55 PM

Proud Italian Cook said…
I love lima beans and don't make them near enough, but once a year I make this dish with artichoke hearts, lima beans, Italian flat beans,and sometimes asparagus, tossed up with crispy bacon and garlic flavored olive oil. You'd love it! I'll make it for you!
June 29, 2009 at 11:02 PM