Everything but the OINK: Lupa NYC Pig Lunch 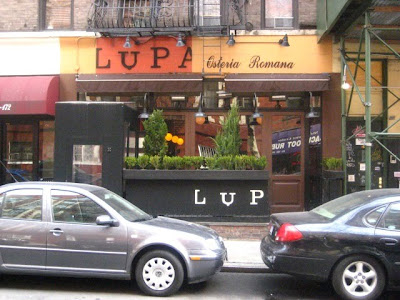 We were invited to a tasting at Mario Batali's NYC osteria LUPA in the West Village last week.

This was going to be scary. The title was "The Whole Pig: Everything But the Oink".

The lunch was a tasting of the whole pig, known in Rome as "Quinto Quarto", literally "the fifth quarter". It is a way of cooking a butchered animal and using EVERYTHING. The cheeks, the feet, tail, tongue, liver, you name it, we'll eat it.

Yikes, could I get my husband to eat pig trotters? pigs ears? Hell, I don't even know if I want to eat that stuff. But we're going, if for nothing else, for the fabulous wines that Georgi, the sommelier always pairs with the courses.

These pigs (that would be us) ate and drank from noon until 4 pm.

Here is the menu, then let's discuss the food.
Sorry, the photos are dark, but at least you get the idea.

THE WHOLE PIG
EVERYTHING BUT THE OINK 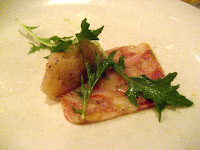 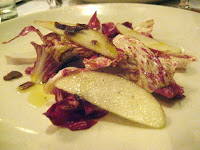 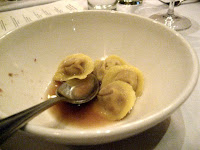 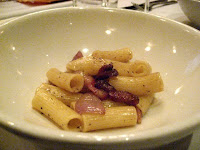 I forgot to snap a photo, but this was a beautiful pork loin with a prune relish/chutney. Use your imagination....... 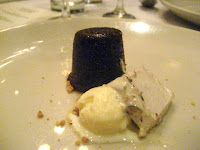 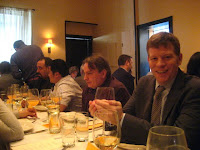 Proud Italian Cook said…
I want to go to Lupa, minus the feet, trotters and ears, but everything else looks and sounds fabulous!!
March 5, 2009 at 10:13 AM

Culinary Wannabe said…
Love Lupa, but hate that you can't make a reservation and have to wait forever for a table normally. So do tell, did you like the pigs feet??
March 5, 2009 at 10:31 AM

Ciao Chow Linda said…
I would say "lucky you" getting invited to Lupa, but then again pig's feet and ears aren't my thing. My grandfather used to cook them in the basement, much to my mother's consternation.
March 5, 2009 at 10:48 AM

The Food Hunter said…
Sounds like a great meal. How does one get on that invite this. I had a pig ear and tail salad at one of Batali's other venues. It was really good.
March 5, 2009 at 12:53 PM

Foodiewife said…
Wow! Your fabulous meal makes my pot roast dinner look like pig slop (just kidding). I'm missing out on the the culinary delights of NY. Haven't visited your neck of the woods for 30 years.
What fun! Thanks for giving me a voyeur's taste of the whole pig.
March 5, 2009 at 5:53 PM

Sapuche said…
Four hours of eating and drinking! What a fun time, I'm sure. That Apician spice bread budino and torrone looks like a great way to end your food adventure.
March 5, 2009 at 9:22 PM

Randi Lynne said…
My husband and I ate there last night. We were able to make reservations online and had no wait. It was lovely; thank you for the recommendation. He had the Roasted Pork "Arista" and I had the Saltimbocca. We shared some caramel gelato for dessert. :)
May 7, 2009 at 8:42 AM

Anonymous said…
This comment has been removed by a blog administrator.
October 3, 2009 at 6:16 AM