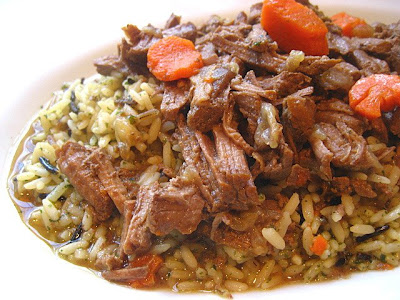 I read an article a while back about a guy named David Ansel, also known in Austin, Texas as the Soup Peddler. After trying to reinvent himself after a failed career, he started a small business by emailing his friends and telling them he would deliver soup on his bicycle to them everyday at lunch time, would anyone be interested?

He now has 2000 soup customers! This is food entrepreneurship at its best.
Click here to read the article in Food & Wine.

I have tried 3 of David's soup recipes, unlike the Soup Nazi from Seinfeld, he is willing to share his recipes! His white bean soup with pan seared salami is terrific.

File this recipe under OH MY GOD GOOD!!!!!

This is more like a beef stew rather than a soup, and he calls it Hunter's Stew.
I guess after a day of hunting for bargains, this would be a comforting dish. (I obviously don't hunt animals, I just eat them). 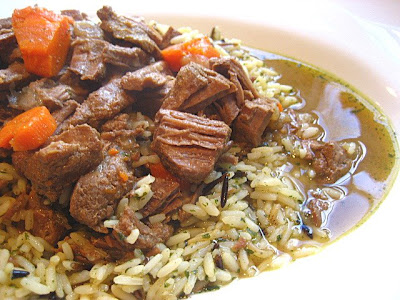 The beef braised in Madeira wine is so delicious and gives this stew such a distinctive flavor, make sure you serve it over the wild rice as the recipe calls for. It is quite hearty.

I decreased the amount of stock, and used chicken stock, because that is what I had on hand. I have made it both ways, and I liked it better w/ the chicken stock.

Preheat the oven to 300°. In a large, heavy ovenproof saucepan, heat 1 tablespoon of the olive oil. Season the meat with salt and pepper and cook over high heat until browned, about 2 minutes per side. Transfer the beef to a plate and wipe out the saucepan. Add 2 cups of the beef stock and the Madeira to the saucepan and bring to a simmer. Return the meat to the saucepan, cover and braise in the oven for 2 to 2 1/2 hours, turning occasionally, until tender.

Heat a large enameled cast-iron casserole or soup pot over high heat. Add the wild rice and cook, stirring, until it begins to pop, about 2 minutes. Add the onion, carrots and the remaining 2 tablespoons of olive oil and cook, stirring, for 2 minutes. Add the remaining 8 cups of stock and bring to a simmer. Reduce the heat to moderate, cover, and cook until the rice is tender, about 50 minutes. 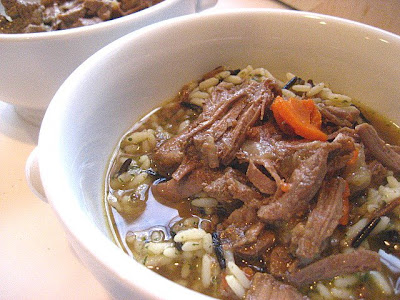 Remove the meat from the braising liquid and let cool slightly, then shred it. Add the shredded meat and its braising liquid to the casserole and season with salt and pepper. Simmer the stew for 5 minutes, then ladle into bowls and serve. 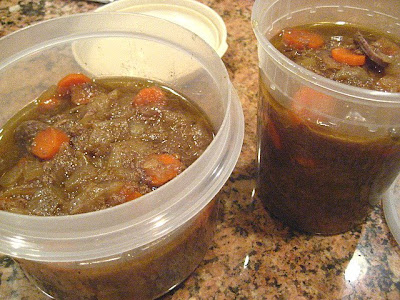 Double the recipe so you can freeze the leftovers without the rice.

Ciao Chow Linda said…
Stacey - I'm in on the Hunter's Stew. It looks like just the right thing after a hard day hunting and gathering. I never used Madeira Wine. Would it be much different with another red wine? This reminds me of what Rachel Ray calls a "stoup."
January 20, 2009 at 7:54 AM

Culinary Wannabe said…
What an amazing story! Soup on a bike?! It's like delivery in the burbs. :) This looks awesome, I am definitely bookmarking!
January 20, 2009 at 8:01 AM

kat said…
Anything with wild rice is good with me. The rice in your picture doesn't look like wild rice though is it a blend? I find I like chicken broth better than beef broth in most recipes.
January 20, 2009 at 9:27 AM

Stacey Snacks said…
Linda:
No substitutions for the Madeira wine.
Madeira has its own distinctive flavors, sort of like a Marsala wine.

Kat:
You are right, I couldn't find just wild rice (except at Whole Foods lately), so used a blend.

Jersey Girl Cooks said…
Wow, this looks good.I especially like the wild rice. I did soup on my blog last night. We've been havint it at least twice a week. I am going to check out the artcle. THANKS!
January 20, 2009 at 9:30 AM

Anonymous said…
Hooray for the Soup Peddler! His book The Soup Peddler's Slow and Difficult Soups is great.
January 20, 2009 at 3:07 PM

Anonymous said…
I am always amazed how people get business off the ground...he had an awesome idea.

Anonymous said…
I remember hearing about this guy a years ago and thinking that he was on to something. Sounds like a hearty manly meal:-)
January 20, 2009 at 4:51 PM

Yes, the Soup Peddler started in my old neighborhood in South Austin. He had a very short menu at first--just soups--and would deliver them by bicycle to my front porch in reusable containers closed with a rubber band. I was lucky to enjoy a meal with him at a friend's house in recent years--he's a really nice guy and an extremely down-to-earth food lover. Completely unpretentious, which is rare in this climate of "foodieism."