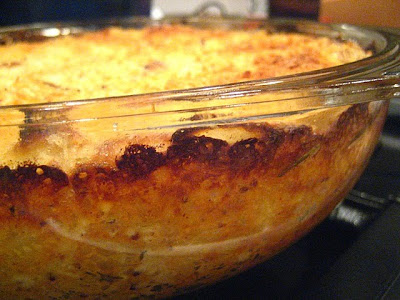 Would you believe I am a virgin?
Don't believe it.

Well I am a macaroni and cheese virgin!!!! I have never made it before in my life!!!
It's one of those things that I am afraid to have in the house for fear of devouring the entire casserole. I love it.

It snowed this weekend in New Jersey and besides shoveling snow in my apron and drinking wine, I decided to make mac and cheese after reading The Constables' Larder blog and saw his version. Giff's recipe looked so good and I was so in the mood. 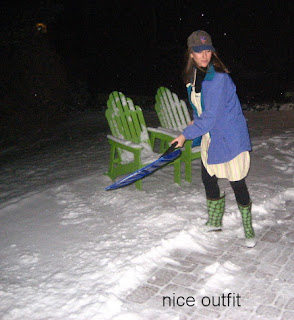 After 2 glasses of wine, I started grating my knuckles.
I mean grating the cheese on a box grater!
(Hey, a little blood in the mix never hurt anyone!).

Over the years I have collected so many nice looking mac & cheese recipes but never actually made one! My SIL Linda loves Martha Stewart's recipe. She swears by it. Next time.

Tonight, I used Giff's recipe as a guide. I changed the cheese from cheddar to a mixture of half cheddar and half Comte (Gruyere).
I also used half and half (what the hell, go for it!!) because I did not have enough whole milk in the house and I substituted panko breadcrumbs for the breadcrumb mixture. 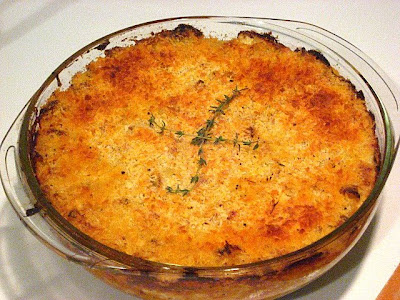 This was definitely an adult version. You really taste the lovely whole grain mustard and a bit of white wine. The fresh rosemary & thyme also dressed this version up a lot. The beautiful crust was my favorite part of the dish (as it always was with the Swanson frozen mac n cheese dinners of my childhood!).

I drizzled some truffle oil on top of the finished product and it was excellent & very adult!

So, I have now been inducted into the mac and cheese club.
Well it's about time!

Constables' Larder's Macaroni & Cheese: (changed a bit by me).

1. preheat oven to 400. Cook pasta in a large pot of boiling salted water for 5 to 7 minutes -- you do not want the pasta to be fully cooked. Drain, then rinse under cold running water in a colander.

2. melt butter in a large saute pan over medium heat (Giff likes to use a cast iron pan so he only has one pot to wash). Add onions, garlic, thyme, and rosemary and cook until onions are soft, 8-10 minutes. If you do not have fresh herbs, use a pinch of dried thyme. Add wine and cook for 2-3 minutes. Remove and discard the sprigs of herbs (if you used dried herbs, just leave in the mix). Whisk in flour and cook, stirring for 1 minute. Gradually whisk in milk then mustard. Reduce heat to keep the sauce at a gentle simmer and cook, stirring constantly, until thick and creamy. Remove pan from heat and stir in most of the cheese, leaving about 1/2 to 1 cup of cheese for the top. Stir in the cheese a handful at a time, stirring until completely melted after each addition. Season to taste with salt and pepper. (I just mixed all the cheese together, did not bother w/ a top layer of cheese).

3. fold pasta into sauce and stir until well coated. If your pan is not oven-proof, transfer everything to a buttered baking dish. Scatter the remaining cheese on top, then sprinkle with bread crumbs. Bake until crust is golden, about 25 minutes.

Drizzle with a little truffle oil to make it extra rich and special! Stylin'! 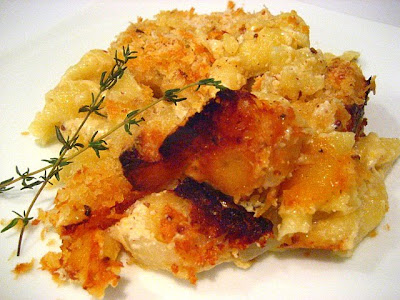 Peter M said…
I don't know if I should laugh or cry at the virgin reference....LOL wins!

kat said…
So good so good...not to brag or anything but you have to try my version with caramelized onions, gruyere & cherry tomatoes. Its one of the dishes I'm proudest of.
January 14, 2009 at 9:53 AM

talk about a "sinful" recipe..
sounds decadent but DELISH!!!!!

LaDue & Crew said…
Love the boots paired with the apron. Yup, true leaders make their own fashion statements, lol. This looks delicious- my fav is the crunchy topping too!
January 14, 2009 at 10:16 AM

I will definitely try this recipe and can't wait to use my Panko breadcrumbs (which I've only used before for dishes like Asian meatloaf with hoisin sauce). Sad thing is, I know my kids won't touch it since it's not processed Kraft stuff. They won't even eat the Stouffer's frozen mac-n-cheese (which is a step up from Kraft's, if you ask me)! Remember Howard Johnson's mac-n-cheese?! That was yummy stuff, but I think all HoJo's are out of business now.
January 14, 2009 at 11:27 AM

Pam said…
I was just thinking to myself that a drizzle of your new truffle oil would be tasty on this and there it was at the bottom of the post.

John and Lisa Howard-Fusco said…
That looks wonderful. Homemade kicks out of the box's butt every day and twice on Sunday! - John
January 14, 2009 at 11:37 AM

Anonymous said…
Welcome to the club! Cheddar and Comte sounds great. For some reason, I never do the breadcrumb layer on top. One of these days, I'll try it.
January 14, 2009 at 1:05 PM

Michele said…
Okay, i'll admit it, I am also a mac and cheese version! That will change this weekend though. I am going to attempt mac and cheese bites for a dinner party!!!
January 14, 2009 at 1:31 PM

Anonymous said…
Sounds good! I haven't had much luck making M&C from scratch. Call me crazy, but I still love the Kraft white cheddar kind and whenever I make it I find myself making comparisons.
January 14, 2009 at 2:00 PM

Giff said…
you have a new calling. You *must* start selling snow-shovel outfits on Etsy!

Proud Italian Cook said…
I would say you're not a virgin anymore!! This looks sinfully good! You look so cute out there, you must have the best metabolism Stace. I'm gaining weight just looking at this!
January 14, 2009 at 4:12 PM

Anonymous said…
I cannot believe I am about to admit this but I have no idea what the big deal is with truffles because I have never had any. Should I be embarrassed?

Culinary Wannabe said…
Martha actually made mac and cheese on her show the other day and since then I have been craving it like no other! Your post has solidified the fact that I am so having mac and cheese for dinner!
January 14, 2009 at 7:04 PM

Patsyk said…
Between food magazines and blogs... I keep running into mac & cheese. I've made it a couple of times, but am still searching for "the" recipe. I love the way you dressed yours up with truffle oil... what a treat!
January 14, 2009 at 9:45 PM

thepassionatecook said…
i'd never made mac and cheese until recently either... and also did a grown up version with lobster, inspired by an austrian chef who works in NY. i loved it, and i love the idea of yours even more... this might just be the ticket for a lazy sunday dinner... thanks!
January 15, 2009 at 4:16 AM

Connie said…
Forgive me for asking this silly question...what kind of hat are you wearing in the snow shoveling pic?
It looks like a UPS hat??
January 15, 2009 at 12:49 PM

Melissa said…
After 2 glasses of wine, I started grating my knuckles.
I mean grating the cheese on a box grater!

I have never made M&C either. Steve kept saying he would hate anything but the yellow stuff in a box, but then he was served some at a dinner party and felt obligated to try it. Wanna guess if he liked it or not? Ha. So I'll try one soon like you have. And a mix of Cheddar and Gruyere - oh yeah!
January 15, 2009 at 6:52 PM

tavolini said…
Did you eat the whole pan? Seriously, I have never made it either for the same reason. I have very, very, very little self control around delicious food ;)

Rico said…
how can this not have 5 stars ...is not fair surely crispy macarroni cheese is the best...and this one sure lives up to it...well done thx for sharing ..saw you on foodbuzz
January 18, 2009 at 1:55 PM

Anita Lau said…
thank you for this recipe. my son's been bugging me for mac n cheese and I haven't had time to google a recipe for it. he doesn't like the kid version of mac n cheese so i think gruyere will work fine. i might use a mixture of gruyere, cheddar and gorgonzola since he loves gorgonzola! thanks again!!
March 3, 2009 at 9:17 PM