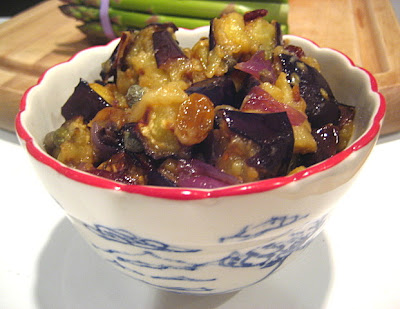 As we all know by now. I am in love with eggplant.
Especially fried skinny slices of beautiful eggplant that burn my gums, for some unknown reason.

Cleaning out the fridge tonight, I had a big, old lonely aubergine, that was getting soft. Should I toss him?
As he was hitting the side of the Rubbermaid garbage can, I saved him from rotting, and grabbed him before he touched any contraband.

I cubed the eggplant, along with a red onion. Put them together on a baking sheet and drizzled with olive oil and kosher salt
I roasted them for 25 minutes at 400 degrees.

Ok, now what to do with them?

While still warm, I splashed them with a little red wine vinegar, & a tsp of sugar.
I added a handful of capers, and a handful of golden raisins. 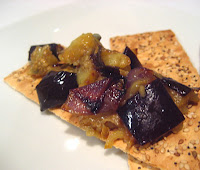 Then I topped the relish with some toasted pine nuts and voila! Eggplant relish!
Served on crackers or crostini. This was delicious.

Caponata is a Sicilian eggplant relish that is made with the addition of celery, green olives and a bit of tomato sauce.

I think I will serve this as an appetizer on Thanksgiving. It was EGG-xellent!
Email Post
Labels: Appetizers Crostini Eggplant Vegetables

Jersey Girl Cooks said…
Hi Stacey,
That will be a great appetizer for Thanksgiving. Did you know yesterday was National clean out Your Fridge Day? Last week I had some eggplant. It was thin and made my mouth sting and I immediately thought of you and told my husband that I am not the only one with the weird mouth thing when eating eggplant.
November 15, 2008 at 10:22 AM

Anonymous said…
gotta love the caponata. i have not had any in so long. i like the additions of the golden raisins AND the capers... sweet and salty. mmmm.
November 15, 2008 at 10:32 AM

Lori Lynn said…
Wow! You made a masterpiece out of something that was almost garbage.

Anonymous said…
wonder if the "taste" in the mouth thing with eggplant is related to the asparagus "thing" with urine..

we need a chemist.

kat said…
Oh, I would so love that that but Matt on the other hand has this thing against eggplant. I tried so hard this summer to change that.
November 15, 2008 at 11:46 AM

Anonymous said…
Yum, I love eggplant too but my hubby is allergic so needless to say I never get to have it! This sounds wonderful.
November 15, 2008 at 12:13 PM

Proud Italian Cook said…
And to think this dish almost didn't make it, and now it's gonna grace your Thanksgiving Day table! Your creative mind whipped this up in no time! Love the raisens and pinenuts too.
November 15, 2008 at 9:09 PM

Anonymous said…
I might call them aubergines and not eggplants but I still love 'em - that relish sounds yum!
November 17, 2008 at 1:13 PM

Susan from Food Blogga said…
I can't get enough eggplant caponata. I wish I had some of yours with a piece of crust Italian bread right now.
November 18, 2008 at 6:53 PM