NOT My Mother's Brisket 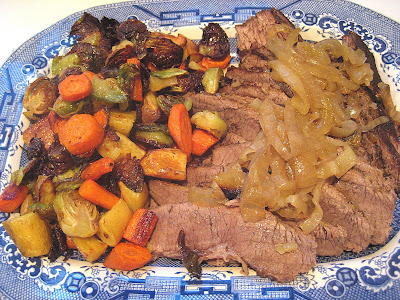 This goes with the post Not My Mother's Brussel Sprouts.

As we all know by now, my mother is no cook.
I have not made a brisket in 8 years or so, because the memories are still with me. 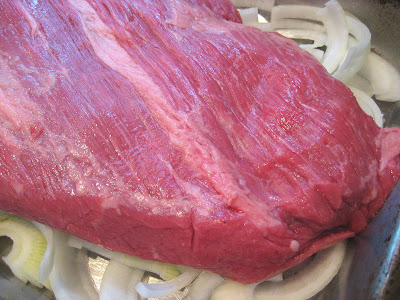 Growing up, we had brisket almost every other week, along with dried out chicken, burned Delmonico steaks (what a waste of money on the most expensive cuts), London Broil (which should be banned from everywhere), frozen vegetables, and if we were lucky, a jar of Ragu with spaghetti!

I sound like an ingrate. I did get a lot of my artistic talents from my mother, and I thank her for that. However, my culinary skills were not learned in that house for sure!!!!

For Rosh Hashanah, which is the Jewish New Year, I usually make the Silver Palate recipe Chicken Marbella, which is a crowd pleaser. It's sweet and simple and you can make it the day before.
This year, I decided to be nostalgic and make a brisket to go along with the chicken dish.

I searched google for a GOOD brisket recipe, and I found that the most downloaded brisket recipe on the internet was 1995 Gourmet Magazine's recipe "My Mother's Brisket". You can find it on epicurious.com.

It came out tender and delicious. I served it along with roasted vegetables (brussel sprouts, carrots and potatoes), and sweet noodle kugel, which is like a bread pudding with egg noodles, raisins, apples and eggs. 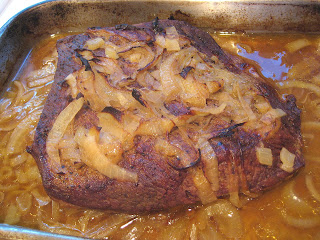 A delicious holiday dinner, and will make great sandwiches with horseradish for lunch tomorrow!
Maybe now I won't wait another 8 years to make a brisket!
Email Post
Labels: Holidays Meat

Anonymous said…
i made this brisket as well, and smitten kitchen's challah bread.
It all came out delicious!
glad yours did too!
September 30, 2008 at 9:03 AM

Anonymous said…
happy holidays, stacey! this brisket looks fabu. brisket has been on our list of things to make for about 2 years now. can i come over?
September 30, 2008 at 9:37 AM

Proud Italian Cook said…
Happy new Years to you and yours Stacey! Your brisket looks so good with all that onion juice. Yummm!
September 30, 2008 at 9:54 AM

Jennifer said…
That looks amazing :) I had dinner with some family friends for the New Year this week & we had brisket as well...so good :) The husband actually made it (believe it or not! :)) and has a ton of other old Russian Jewish recipes up his sleve. I've gotten him to agree to teach me - hopefully they'll become blog worthy! :)

Anonymous said…
Whoa! What a brisket!!

Fantastic articles. Found you via FoodBuzz. Don't you like the apron and spatula we got from them??