I am officially on the wagon. Not with booze, but with DUCK!

We ate duck in Paris almost everyday. We ate duck confit, smoked breast of duck (magret de canard), duck rillettes, duck liver pate, even duck giblets, and foie gras (goose liver, which I actually never liked, and I am a liver fan). They served us duck 3 different ways on the French airlines we took over and back to the U.S.
Duck must be the country mascot of France.

At home, I never order duck, it's always greasy and fatty, but over there, it is always fantastic.
To put it mildly, I AM DUCKED OUT!

Well, someone must have read the blog from French airport security when I mentioned I was smuggling in the duck rillettes in my luggage, (those wonderful looking homemade jars from that farm in Burgundy, which we haven't opened yet). 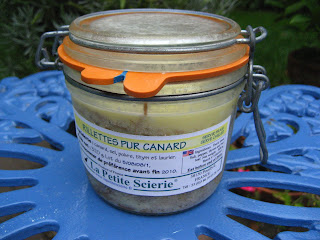 Well, sure enough, security walked into the airport lounge and asked to see my husband. They took his passport & papers and whisked him off. I kid you not.
I sat there for half hour, on the verge of hysteria. Alone in a panic. Was it the duck rillettes? Was it the kilo of vacuum packed dates from the Emirates that a friend gave me to take home (that looked like drugs!)? I was freaking.
We had no cell phones and I had no idea where they took him!

I actually started to cry. I was overtired (and we know how much I love to fly), and I had had 2 glasses of Perrier Jouet already!
The girl said to me "Madame, please do not worry, if it were serious, then the police would've come and taken you both away, I am sure it is a baggage issue". Oh thanks, that makes me feel a lot better!

Baggage, shmaggage
About 45 minutes later (seemed like 4 hours!), my poor husband came back, calm (at least one of us was), and told me that while x-raying the luggage before going into the cargo of the plane, they saw some metal rods and questioned him in security and asked to him to go down to security and open the luggage.

He told them that his crazy wife had to bring freakin' duck home and he was sorry. They pitied him and let him carry on the 2 jars of rillette de canard (they must know how wives can be!).
It was the metal closures on the jars that were the red flag. You can bring in the items from France, as long as they are vacuum sealed, but the metal is a no no.
They were very nice about it, they could have confiscated the contraband.

So, the duck smuggling criminals were free to go home to New Jersey.

The moral of the story is: Don't blog about every little detail, down to what you are eating in the middle of the night, to what you are sneaking in your luggage!
You never know who is reading!

K said…
OMG! That sounds so horrible. Me and Mama are having horrible visions of you in the airport freaking out. I'm glad it worked out though. And with the Duck! Hooray!
September 17, 2008 at 9:17 AM

Linda said…
Well no surprise here that it would be FOOD!!!! that would get you guys practically thrown into a french prison!!! I had visions of us all storming the Bastille!!! trying to break you and your DUCK!!! out of there!!!!
Seriously, welcome home!!! Glad it was a great trip!!!
Love ya!!!
September 17, 2008 at 10:23 AM

Giff said…
Sounds mildly traumatic even though I am laughing at the story. Who knew that duck could be so explosive? (don't go there)

This is too funny (from here). I don't know why you got so hysterical... they called Henry over. You got to drink champagne! Just be glad there were no cavity searches involved!

This is funny in another way... I joined the Duck Club last week. Lindsay was on a class trip for a couple of days so Michele and I went to The Royal Palms for dinner. I had the duck and fois gras. I have to learn how to cook it now!

Glad you're back safe.

Anonymous said…
It's scary and then funny since it was food that caused such a security stir! The rillet de canard looks wonderful so happy they didn't confiscate. Glad you're home safe...
September 17, 2008 at 1:30 PM