The Art of Deli: Sloppy Joe & Pastrami on Rye 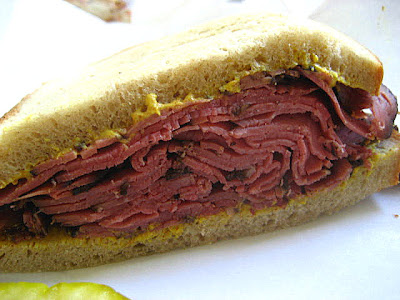 FACT: great deli can only be found in the Northeast. I am not talking about lunch meat pretending to be turkey breast or some kind of scary looking beige, processed crap they call ham.
New Jersey, NYC and Philly are the only cities where I have found good deli, unless your town has a transplant that has relocated from Deli-ville that I don't know about.

I grew up in a predominantly Italian American and Jewish neighborhood. We had 2 delicatessens. Carmella's Italian Deli, that made the best Italian subs w/ Genoa Salami, Mortadella, Cappicolla, Provolone, shredded lettuce, tomatoes, onions and oil & vinegar, with oregano, of course. Then there was Beck's Kosher Deli across the street. They had fresh hot turkey sandwiches or hot pastrami on rye w/ mustard and a garlic pickle on the side. We kids would take turns after school, crossing the street, never playing favorites, though Mrs. DeFilippo (owner of Carmella's) was the nicest to the kids!

The word DELICATESSEN is of German origin, and means delicacies. These Delicatessens were little places that sold quality meats and prepared goods for takeout. I used to go to the Jewish Deli in Queens as a kid with my grandmother and she would buy knishes, tongue (gross) and other little delicacies that we could open up like little presents when we got home. They also had a pickle barrel heavy with the aroma of garlic & dill, filled with giant pickles. Most delis have since gone. Deli is truly a lost art.
NYC & Brooklyn still have the best, ie. 2nd Ave. Deli, Carnegie Deli, Deli King and others. One corned beef sandwich at these joints will feed 4 people and the quality of meat is fantastic. These guys (& gals) slicing the meats and making the sandwiches are professional deli men. True artists.

Great pastrami is hard to find. I like mine with a little fat and gristle. It is the same cut of meat as corned beef, just a different process. Check out how to make your own pastrami (which I will never attempt). 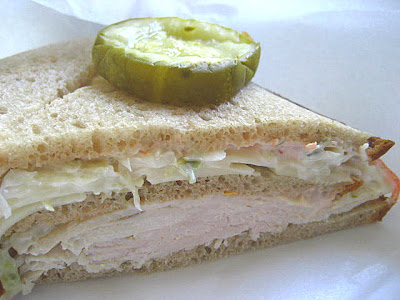 In Northern New Jersey, we have our very own sandwich called a SLOPPY JOE. This is not the ground beef and tomato sauce that the rest of the country eats, but originated here, and is 3 slices of rye bread, and either turkey, ham or roast beef (you can combine them), dripping with cole slaw, Russian dressing and Swiss cheese. When it's made w/ REAL turkey (not the crap called "lunch meat") then it is a true delicacy. 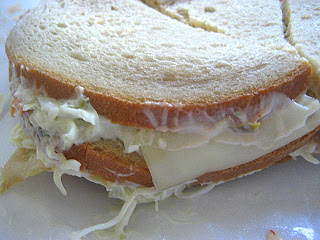 Today, my brother and I shared a Turkey Sloppy Joe & a hot pastrami w/ brown mustard on thin sliced rye (the bread is sliced to order) at the Millburn Deli, a fantastic deli that is always packed.

The photos speak for themselves, so take a number and get in line! 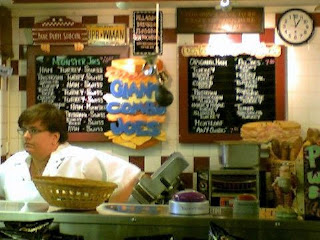 krysta said…
since i'm a california native and never been to nyc, the first i am going to do is eat at a real deli! i really would love a reciepe of that sloppy joe... much better than the hamburger version.
August 5, 2008 at 9:48 PM

Anonymous said…
Oh man, that first picture is making me hungry and I just had dinner. I have a feeling I'll be popping into Ben's (do you think it is as good as 2nd Ave or Carnegie?) for a pastrami sandwich for lunch later this week since it relatively close to where I work.
August 5, 2008 at 11:07 PM

Kelly said…
Hi Stacey!
Thanks for stopping by!
And yes coffee..cocktails..together...bliss!
haha
I like your blog..I am gonna add you to my blogroll ok?
oh and when you leave a comment on my blog it won't show until I get on and approve the comments. :)
August 6, 2008 at 11:28 AM

Anonymous said…
I was at Millburn Deli today, on a day trip from my home in Point Pleasant. I grew up in Union so a trip anywhere near that area MUST include a sloppy joe run. :-)
Great blog...I'll be adding you to my faves!
October 25, 2008 at 6:01 PM

stephchows said…
Have you ever had the sloppy joe at Town Hall Deli in South Orange? It's the original birthplace of it and is AMAZING!! You have go!
http://www.townhalldeli.net/
November 5, 2008 at 4:10 PM

Anonymous said…
I grew up in Millburn. The deli does have great turkey Joes. They were the only thing I ever ordered.
March 24, 2009 at 9:16 PM

Anonymous said…
This comment has been removed by a blog administrator.
October 3, 2009 at 5:17 AM

catering Fort Lauderdale said…
Knowing more about the food that you indulge in makes the eating experience more special. I just love the mixture of colors and aroma whenever I see a nicely prepared pastrami sandwich. Most people do not even have an idea as to where the word 'deli' came from. Thank you for sharing your thoughts on this topic.
August 4, 2011 at 5:34 AM

Unknown said…
I lived in Springfield,NJ and frequented the Millburn Deli as well as The Bagel Chateau and Tabatchnick's. I live in FL NOW and miss those sloppy joes so much! Nothing like I here. Every year when I come north to visit I have to stop at The Bagel Chateau. 💕